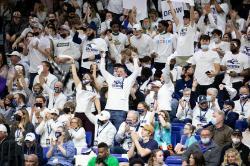 Join the men’s and women’s basketball teams as we find out who they will face in the first round of their NCAA Tournaments! Live reaction shots will be broadcast as a packed Willett Hall celebrates two historic seasons! First-come, first seated.

Wear Longwood attire and bring your scarves to wave on national television as CBS cuts to Farmville during their Selection Sunday show! We will have plenty of food, drinks, giveaways, highlight videos, and more between shows, so make plans to be there.

For more details, including regional watch parties head over to Tournament Central.